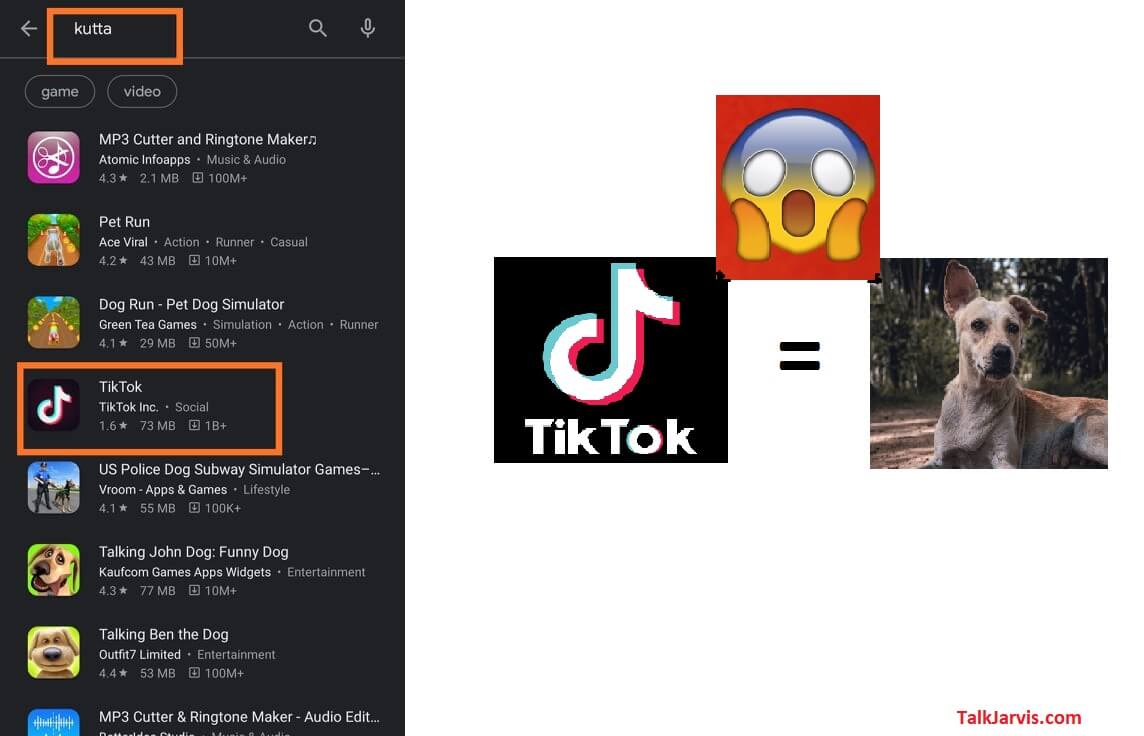 Search “Kutta” on Play Store, The Result will be TikTok: After the great success of Chutiya news anchor of India on google search results. It’s now time for TikTok! If you search on the term “Kutta” on the play store you will get TikTok in the top results. Kutta is the Hindi translation of dog.

The rival between tiktok and Indian people had started in the recent April when Tiktokers started comparing themselves with hardworking and good content creators of youtube. According to several famous tiktokers, the youtube creators create cringe and unproductive content. But, now the Indian public made it’s clear to everyone who makes cringe content!

The youtube vs TikTok rival took a great spike after the release of the legendary roast video by famous YouTuber carryminati. This roast video was in the response of famous tiktoker Amir Siddiqui‘s live IGTV video.

Although, the video was deleted from youtube as many Tiktokers has taken it on the heart and reported it. But, in case you are wandering to watch it, below is that video:

TikTok in Top Results if You Search Kutta on Play Store

After the deletion of this video from youtube due to the various reports done by Tiktokers. The anger of youtube and carryminati supporters went to the seventh sky. It was like an eruption of the volcano.

Some people also saying to boycott TikTok as it is a Chinese app. Adding to it they claim that it leads youths to an unproductive lifestyle. Which indeed is true! and enough to ban titkok and app like it in all over the world.

Why Tikok in Results for Search “Kutta” on Play Store?

Well, telling the exact reason with 100% surety that why tiktok is appearing in the search result of Kutta on play store is hard. It is because the results that are shown on google are produced by a complex process of computer algorithms. Although, it very hard to manipulate those results given by google but, as we all know nothing is impossible. This incident may be a result of blackhat seo hacks done by hackers, to forge the search results. Or, the google algorithm detected that people are really hating this app and correlated it with a dog.

Note that the Mp3 cutter in the search result is due to similarity in term cutter and kutta.

Now, It’s up to you whether you support or boycott tiktok in the response of current events. You can read this post: Why tiktok is bad for your mental health? to better decide.

Let us know your opinion about tiktok and the incident that tiktok is appearing in the search results of the term “Kutta(Dog)” on the play store, in the comment section given below. We will be glad to know and answer.