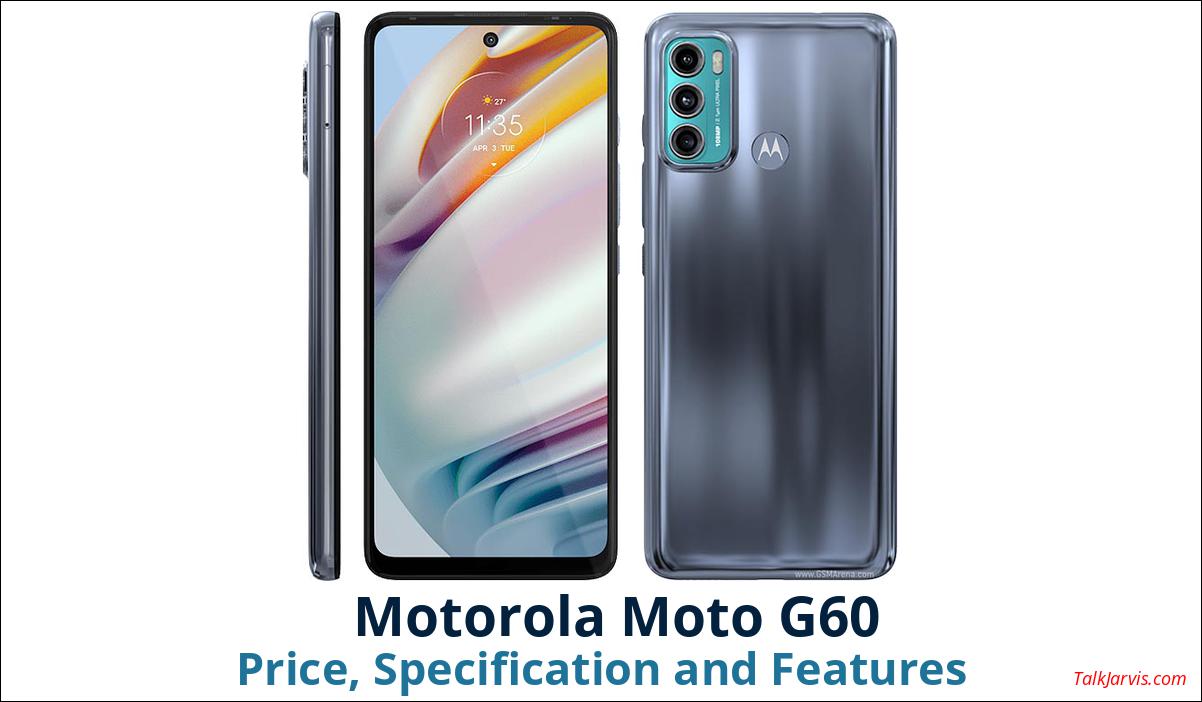 Motorola Moto G60 is compatible with the latest Android 11 version and comes with 6GB of RAM variations. It comes with Snapdragon 732G powerful processor and 128GB storage, microSDXC type. The mobile is easy to use because it has a weight of 225g, 9.8mm thickness. It comes with a 6.8″ inch display of resolution 1080×2460 pixels. The phone is equipped with a 108 megapixels back camera that can record up to 2160p video.

Motorola Moto G60 has an Android 11 operating system that means it has all the latest and advanced qualities. It has the latest Qualcomm SM7150 Snapdragon 732G (8 nm) chipset with Octa-core (2×2.3 GHz Kryo 470 Gold & 6×1.8 GHz Kryo 470 Silver) CPU and Adreno 618 GPU. Let’s now know about the RAM, it comes on a 6 GB RAM variation that is running on the Snapdragon 732G processor. This chipset, RAM, CPU and GPU combination makes this mobile device truly fantastic.

Motorola Moto G60 comes in a variant of 128GB 6GB RAM and the internal storage of UFS 2.1 type. Internal memory capacity is enough for most general use but if you want this phone to store bigger files then for this purpose you guys have the option of a microSDXC (uses shared SIM slot) card slot to increase the memory capacity facilitating more space.

The phone is equipped with sensors Fingerprint (rear-mounted), accelerometer, gyro, proximity. The most interesting part is that the making company is providing this whole premium package phone at a lower price range. Now friends, tell us in the comment box below that, which phone can beat Motorola Moto G60 mobile phone’s body looks in a similar price range.

The phone has a massive Li-Po 6000 mAh, non-removable battery. The phone making company has furnished the following charging features in Motorola Moto G60:

This whole power system of the Motorola Moto G60 will give a fast charging experience and long-lasting battery life to the users. It is definitely useful for most users who are busy in their work-life and want less charging time and long power backup in their mobile phones.

The phone comprises Wi-Fi 802.11 a/b/g/n/ac, dual-band, Wi-Fi Direct, hotspot which will satisfy your fast web availability needs quite well. It has a 5.0, A2DP, LE Bluetooth setup. Another common query is whether Motorola Moto G60 supports GPS(Global Positioning System) or not? The answer is Yes, with A-GPS, GLONASS, GALILEO. It has USB Type-C 2.0, USB On-The-Go which is going to charge the phone and transfer documents at an ultimate speed. Some users also have the question, does Motorola Moto G60 has a Network File System (NFS) or not? The answer is definitely Yes.

Radio lovers of our community also ask about the radio system of the Motorola Moto G60 mobile. A straight reply is yes, an FM radio.

From the above records, anybody can undoubtedly judge that the sound and communication framework which is accompanying Motorola Moto G60 is great. Users are definitely going to love the quick web availability and transfer rate of this newly launched smartphone. We will discuss the Motorola Moto G60 price in this post as well.

The price of the Motorola Moto G60 mobile phone is about 250 EUR. Some people had been bowled over after looking at the price. But it’s True😀.

Guys, it’s now your turn to comment down who is thinking to buy the newly released Motorola Moto G60 smartphone after knowing all its cool specs, price and functionalities in complete detail. Remark down your viewpoint on the awesome and cool features of this newly launched mobile Motorola Moto G60. If you are a mobile lover or want to try a new phone then allow the notification to get the latest phone news instantly just after their announcement. Also, follow our mobile phone category to remain updated with the latest mobile tech advancement news.