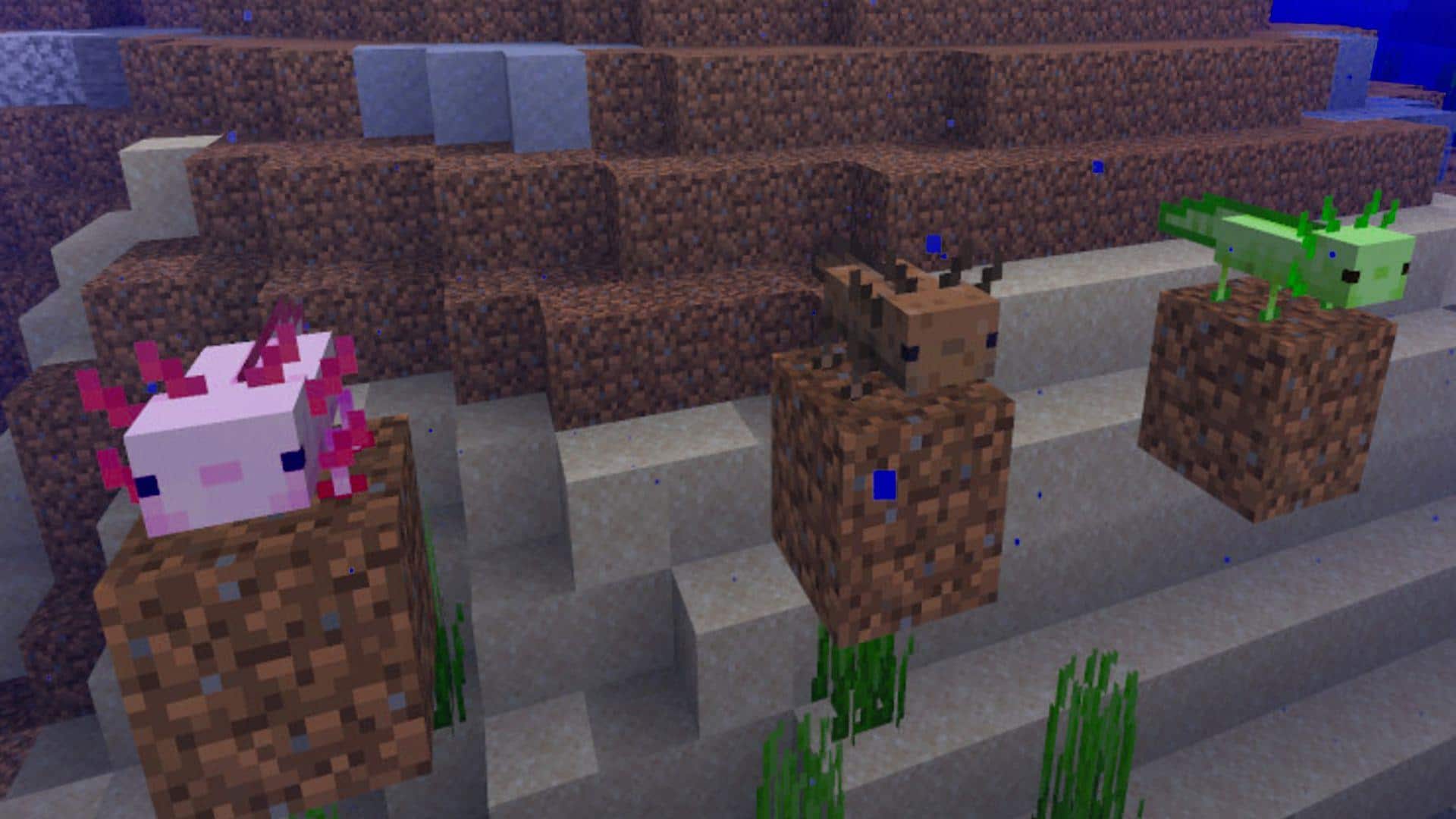 Axolotl Minecraft – How to get Blue Axolotls in Minecraft – First of all the great news that The Minecraft Caves & Cliffs update 1.17 is live now with several new, exciting, and amazing additions including the Axolotl, for which all are waiting from a long time.

Here is the latest trailer released by the official Minecraft Youtube channel, If you haven’t watched it, then hit the play button and watch it right now. I’m very sure that you will enjoy it very much. It is one of the awesome trailers released by minecraft.

What is Axolotl in Minecraft?

Now first of all let us see what exactly is this Axolotl in Minecraft (This is for new ones). Basically, Axolotl is an aquatic creature in the Minecraft game making it more intresting that mostly attacks other underwater mobs such as Squid, Fish, Guardians, and Drowned.

Most important thing is that Axolotls need continuous water to survive but for a few minutes they can also survive on dry land. But they start to dry out without water which gives him continuous damage until rehydrated otherwise they will die.

The best thing is that Axolotls pretend to die and regenerates health. At the time of playing dead, the Axolotls can regenerate their health and during that time-poor mobs are unable to target them, and in this way, Axolotl Minecraft regenerates their health.

Minecraft Axolotls have five different colors, but the casual players would probably only think it was four because they can only see the four-color of this Minecraft Axolotls, and the fifth variant that is blue Axolotls is extremely rare. It is very very difficult to find these blue Axolotls because there is a 1:1200 because only 1200 Axolotls left in the wild, which also makes them super rare.

If you are also a glitch searcher in Minecraft then here is a gift for you:- Top 5 Minecraft Duplication Glitch That Still Works

If you are extremely lucky then you may get Blue Axolotls in Minecraft in the wild. If you got it just gently pick it up with a bucket and then take it to a safe place that is covered with water to ensure that it will not swim away to another location or die. Here is a fun fact that each and every Axolotl in Minecraft spawned has about a 0.083% chance of being a Blue Axolotl, you can imagine how super rare species is this.

Axolotls belongs to amphibious group that loves to spawn only in underground water. Generally the adult axolotls spawn naturally in groups. of 1-4, typically in caves.

As above mentioned that spawn rate of blue Axolotl is a lowly 0.083%. But here is a pro tip that breeding is far better than finding it while exploring. Breeding gives you a lot more chance than exploring. Generally, Axolotl has a 50-50 chance that it will take the color of one of their parents, but there is also a rare chance it will end up with a little baby Blue Axolotl.

After you got a single Blue Axolotl then you can Breed your super rare Blue Axolotl with another Axolotl of any kind means any color and there is a fixed 50% chance the newborn child will have a blue color, due to one of the parents being blue. Once you have two Blue Axolotls, you can breed more and more Blue Axolotls with a 100% breeding rate, which means after this you will have blue Axolotl in the desired number.

How To Breed Axolotl In MINECRAFT?

Many of you may also be stuck in this question, So here is the simple answer that you can easily breed Axolotls Minecraft by simply feeding them with buckets of Tropical Fish. (You may say that Tropical Fish come in their favorite list, inspired by their real-life behavior)

Next method to get blue Axolotl Minecraft is by using commands. If you are a lazy guy who doesn’t want to explore to find it then this method is exactly for you. But here is a warning for you that this is considered a cheat. Following is the command to get a Blue Axolotl at your own position:-

This command is case sensitive, so be care full. Make sure that you will capitalize the V in Variantand will not do not put a space before or after the colon, otherwise, it will definitely not work. If you feel that this is also a tough job then you may also just copy and paste it directly from this page.